The lovely Danelle is back at it again. You may remember her from the Tinkerbell costume (here) or the Spring Fairy Tutu Dress (here). She has some mad talent and we are thrilled to have her back on our blog! 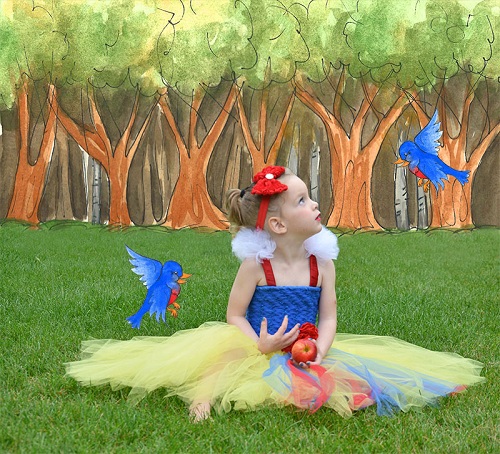 Materials:
Tulle in Lemon, Red and Royal blue - at least two rolls, per color
Tulle in white - one roll
8 inch crochet headband - 1 in royal blue
Shabby bow headband - 1 in red
Satin & Lace floral sash - 1 in red
7/8 inch ribbon - 1 in red and 1 in blue
3/8 inch ribbon - 1 yellow
Scissors
Fabric glue - I like E6000 or Aleene's "Ok to wash it" glue
Measuring board or flexible tape
Cardboard "youth" T-shirt form or a dress makers form, if you have one
Long piece of elastic
Sewing needle & thread


To start, measure your child from her waist down to where you would like the dress to end. Before you cut any tulle, keep in mind that you must DOUBLE your measurement! (Example - if you want a 27 inch skirt, you must cut the tulle at the 54 inch mark. This ensures that the skirt ends up a 27 inch skirt after folding and tying it.) Place the crochet band onto the t-shirt form or dress form and move it around a bit to make the rows as straight and even as possible. Have the seam side facing you. The seam makes a good starting point & will become the back of the dress.

Lay out your measurement board or tape and roll out the tulle and cut at your DOUBLED length. {Pic 1} Try to cut most of the tulle strips now, rather than cutting and tying one by one. There are about 30 or so squares/spaces per row on the crochet band, to give you an idea of how many to cut. Leaving the strip in place, fold it in half, lengthwise. {Pic 2} Still leaving it in place, go back to your original length number, not the doubled one and pinch the tulle strip at that mark, bringing the sides into the middle. {Pic 3}

Now pick up the tulle strip at that mark and keeping the ends even, form a loop at the top. {Pic 4} Place loop through the space on the bottom row of the crochet band, closest to the seam. {Pic 5} Bring loop towards you slightly & push the ends up through the loop & pull ends back down towards you, gently but firmly, to make a slip knot {pics 6}

Continue tying on the yellow strips until you reach the side of your form and add 3 red tulle strips in with the yellow (example: yellow, red, yellow, red, yellow, red). {Pic 7} Then go back to using only yellow strips all the way around, until you're back at the seam. Repeat these steps on the "second" row. You will make the second row/skirt layer by using the fabric squares that are between the strips you previously tied on. This will make a "stacked" appearance. {Pic 8} Continue tying them on and when you reach the spots that have the red tulle, tie on 3 blue strips instead of red. Then continue on with the yellow again until you're back at the seam. {Pic 9} Your skirt is now complete!

Now we can fill the top/crochet band. To do so, start by unrolling the entire roll of blue tulle. Take one end and place it through the space next to the seam on the 2nd row, at the top of the band and tie it into a small tight knot. {Pic 10} Take the loose end and weave it in and out of every other space, pulling the length through so that it is snug but still a little loose. If it's pulled too tightly you will not be able to remove it from the form or get it on your child. {Pic 11} Continue doing this all the way around and when you reach the seam again, simply move down and over to the next row. Continue until the entire crochet band is filled and tie the end off onto the bottom part of the seam in a small tight knot. Cut any loose ends.

Next comes the wrapping of the waist. Take your red 7/8 inch ribbon and unravel it. Place one end between the tulle strips by the knot on the bottom seam. Pull most of it through, leaving about a 12 inch tail. {Pic 12} Then simply wrap the ribbon over the knot and between the tulle strips and back up over the next set of knots. {Pic 13} Once the skirt waist is wrapped & you're back at the seam, tie the ends into a knot and leave the ends hanging loose.

Now you'll want to take the yellow 3/8 inch ribbon & unravel it. At the top of the crochet band, on the 2nd row, locate a square/spot a few spaces from the seam and slide one end of the ribbon behind that space. Do this on both sides of the seam. Take one end and insert it in a space on it's opposite side and repeat with the other loose end. Do this just like you would lace a shoe. Your squares may not all match up evenly but try to keep it as even as possible.You'll notice that the top of mine is a little longer than the rest of the corset lacing. Once you've laced and reached the bottom of the band, tie the ends into a bow and leave the ends hanging loose. {Pic 14} 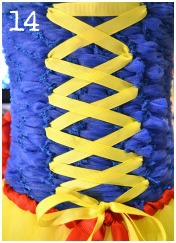 Once the corset lacing is done, you can move on to wrapping the top edge of the crochet band. Do this exactly like you did the waist. Use your 7/8 inch blue ribbon and tie ends into a bow.

For this next part you will need your elastic, sewing needle, thread and your flower sash. Gently remove the flower from the sash and set the flower aside. Measure your child from the top of her armpit, around the back of her neck, and to the top of her other armpit. This is how long your elastic needs to be. Now add 2 inches. On a flat surface, lay the elastic flat and place one end of the sash under the elastic and fold the end over and match it up with the edge of the elastic end. You will need to sew both sides in order to secure the ribbon to the elastic. Don't worry, if you can't sew well, neither can I and it doesn't need to be perfect. {Pic 15} Now take the ribbon and continue to wrap the elastic on a slight upwards angle, overlapping about half way on each wrap. {Pic 16}

Now you will need to cut a bunch of white tulle into 8 in. pieces. I didn't count how many I cut, I just cut a ton of 8 inch pieces. Once the tulle is cut, layer 2 pieces and then fold them into thirds, lengthwise. {Pic 18} Once folded, keep the ends even and slide it under the elastic at the shoulder area and tie it into a knot. {Pic 19} Do not make your knots super tight because the elastic will stretch as you tie more on. Do this all the way around the neck until you reach the opposite shoulder area. Then separate the ends to make it fluffy. {Pic 20}

That's it!! I hope your little girl enjoys her Snow White inspired tutu dress as much as mine loves hers! 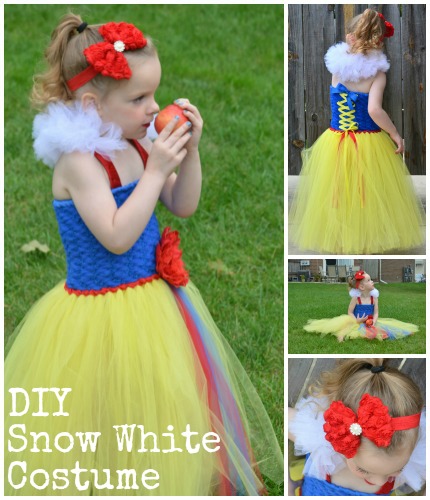